10 Modern Video Games That Went Back To Their Retro Styles 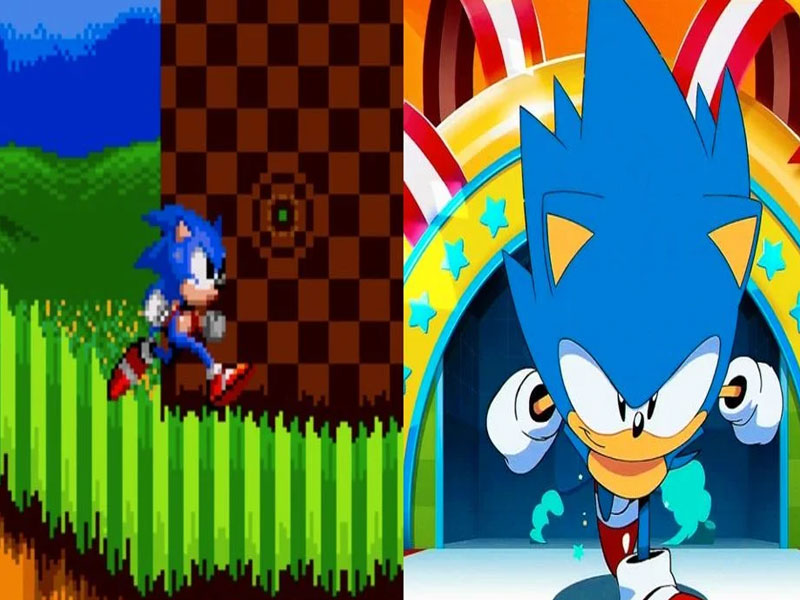 It's always fun to try something new and experiment, but when it comes to games, the adage "if it ain't broke, don't fix it" often rings true.

In the gaming industry, it helps to keep a game or series up with the times. As new technologies become more perfected and readily available, any sensible developer will want to make use of modern methods to keep their projects ahead of the game. Of course, that's not always the best course of action.

It's always fun to try something new and experiment, but there's always the case of "if it ain't broke, don't fix it." Many current series and developers, while appealing to different generations of gamers, have found that a step or two back to retro formulas and graphics can be just as beneficial as going forward.

The Mortal Kombat franchise has had its experimental phases before, but nothing compares to bashing the brains, blood, and viscera out of an opponent in traditional arcade glory. Sure, the series had a few interesting forays into action-adventure titles, arena brawlers, and even a killer chess game, but MK9 was where the series truly got back to its roots.

The game essentially combined the events of the first, second, and third games to create one coherent storyline for the Mortal Kombat tournament. All the classic characters returned and even a handful of new characters joined in the action, but it improved upon the formula set forth by the original arcade titles.

Sometime after Resident Evil 4, the series began to venture into more action and self-aware commentary territory rather than the survival-horror genre the series helped found. Games like Resident Evil 4 and the Revelations games were all well and good, but it lost its familiar fearsome flavor somewhere along the way.

Fortunately, the series has seen a return to form with VII and Village. Although the third-person action has been swapped for a newly-implemented first-person point of view, it takes a lot more from the original survival-style gameplay seen in the older titles. Going for a more horror movie aesthetic and theming definitely helps drift away from the more out there entries of the past.

Prince of Persia Classic went back to basics with a literal remake of the original title featuring Ubisoft's acrobatic prince. The only thing that wasn't a throwback to the original title was the polished design inspired by the visuals of Sands of Time.

With the exception of the game's look, it plays exactly like the original computer and SNES titles, giving the player one hour to beat the traps, fight the guards, and save the princess from the evil Jafar. While it might have been a special occasion sort of game, the developers clearly understood the assignment.

Call it an honorable mention, but Assassin's Creed: Origins not only ushered in a new era for Ubisoft's landmark series, but it gave it a return to form as well. From Assassin's Creed III onward, the series took a more complex dive in its controls, lore, and gameplay. Pirates, revolutionaries, and other historical periods and civilizations are all fantastic, but they lost the sneaky stealth-focused motifs in the process.

In Origins, those elements are brought back in an Egyptian setting that feels incredibly appropriate for the series. Bayek might not be Altiair or Ezio, but it's easy to see how his look, swiftness, and cunning might influence the successors to his mantel. Those familiar with the original series will definitely feel right at home.

There are few video game characters or series that have had their hands in as many pies as Nintendo's princess-saving plumber, Mario. From platform games to sports titles, Mario has seen it all and done it all. But even with the success of 3D titles like Mario 64 and the Galaxy games, the character's true talents shine in traditional platformers.

Of course, Nintendo would return to the traditional Mario formula with side-scrolling adventure titles, complete with familiar powerups and set pieces like pipes, piranha-plants, and castles. By utilizing these classic elements, Mario continues to be one of the most recognizable and beloved faces in the industry.

To give Pac-Man a little credit, it's honestly surprising to see just how versatile he's been since his debut in the 1980s. But from games like Pac-Land and Pac-Man World, it's clear the yellow ball of fun is capable more than the average maze-runner. That being said, a few titles have reached somewhat of a rigamarole status.

Fortunately, with the introduction of games like Pac-Man: Championship Edition and the ever-popular Pac-Man 99, Pac is back in his element as the hypnotic thrill of the arcade classic is recreated and reinvented for a new generation. It's easy to see these incarnations right at home with some of his original outings.

To put it bluntly, Rayman went through a bit of a phase in the Wii era. The Rabbids and their mini-game madness certainly didn't do the limbless adventurer too many favors. While his 3D platforming outings were a bit of a nice experiment, there's only one way to truly experience a Rayman game.

Only in these games can players rescue little Electoons and fight baddies on the backs of giant mosquitos. Rayman Origins and Legends truly feel like a return to the days of the PS1, albeit with better graphics. The cartoony antics of Rayman's world are all there, and there's even the option for multiplayer.

True fans of Nintendo's sci-fi platformer can heave a collective sigh of relief with the release of Metroid Dread, because it's the first Metroid title in years that actually plays like a Metroid game. While there will always be adoration for Metroid Prime, true fans of the series have definitely grown a little weary of the spinoffs.

Not only does the game feature a return to the Metroidvania style, but it brings back the eerie, isolated, Alien-inspired space horror vibes that the original platformers were known for. It's truly a long-awaited return for everyone's favorite orange-suited bounty hunter.

Sonic Mania is the gaming industry's most recent example of "if it's not broke, don't fix it." The hedgehog has seen quite a selection of 3D titles, all ranging in quality and subject matter. Fortunately, the developers recognized that the truly stellar moments of Sonic's career were back in the days of the Sega Genesis.

Enter Sonic Mania with its return to the Green Hill Zone and 16-bit graphics that would have been mindblowing back in the '90s, let alone the 21st century. Sonic, Tails, and Knuckles have never looked better, and the game essentially serves up the greatest hits of the levels in the Blue Blur's career.

The Legend Of Zelda

The series has certainly come a long way since the days of the NES. But while Link and the Kingdom of Hyrule have a long and prestigious career, especially after making the successful transition to 3D, a classic never truly dies.

The Zelda series defined the top-down adventure genre, and although games like Ocarina of Time, Skyward Sword, and Breath of the Wild have brought the series out of the 16-bit eras, the series returned to its top-down roots with the inclusion of A Link Between Worlds and the recent remake of Link's Awakening. Although the other titles are key experiences, the top-down games serve as evidence that the tried-and-true formula will always be a series mainstay.