A step toward fault-tolerant quantum computing 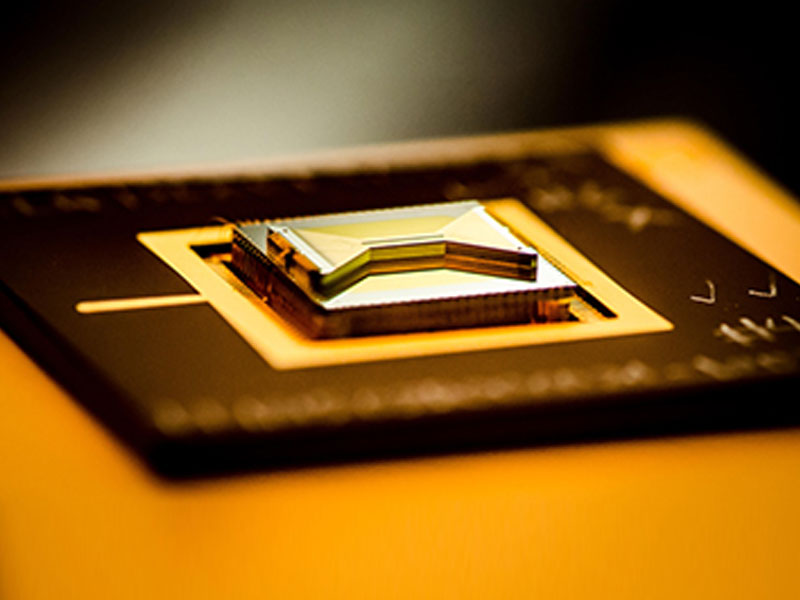 A U.S. research team has demonstrated fault-tolerant control of a “logical qubit” consisting of an array physical qubits: 15 laser-controlled ions suspended in an ion-trap chip. The feat marks a step on the road toward fully fault-tolerant quantum machines. [Image: Kai Hudek/JQI]

Quantum computers—machines in which information is encoded in quantum bits (qubits) that can exist in multiple states simultaneously—have long been touted for their potential to solve problems too difficult for classical computers. But the information encoded in qubits is delicate and, in the noisy real world, prone to errors that are difficult to capture and correct.

Such errors, if uncontrolled, would quickly spread out of control in a quantum computation of any complexity. Thus machines that tackle truly hard problems will need to be “fault tolerant,” capable not only of sniffing out errors but of containing their spread. And fully fault-tolerant quantum computing is no mean trick. Indeed, in a much discussed 2018 address and paper, the Caltech quantum physicist John Preskill referred to it as “a rather distant dream.”

Recent work by researchers at the University of Maryland, Duke University and Georgia Tech, USA, led by Optica Fellow Christopher Monroe, may have moved the dream a bit closer to reality. Using the ion-trap quantum computer in Monroe’s Maryland lab, the team has developed an approach for combining individual physical qubits into a “logical qubit” capable not only of identifying and trapping errors, but of correcting them and preventing their spread (Nature, doi: 10.1038/s41586-021-03928-y).

The result of the code is a logical qubit that is, in principle, more reliable than the individual physical qubits that make it up. The team hopes to build on this proof of concept by wiring up these logical qubits into more complex logic gates and situations.

The notion of a “logical qubit” that combines multiple physical qubits itself isn’t new; indeed, it’s long been known to be fundamental to quantum error correction. A key challenge with such error correction is that qubits can’t be copied or measured to check their status during a computation. That’s because the very act of doing so would destroy the qubit’s quantum characteristics, such as entanglement and superposition of multiple states—the “secret sauce” that makes quantum computing potentially advantageous in the first place.

Gathering multiple, redundant physical qubits into a single logical qubit allows an indirect check on the system without physically querying any one qubit. But the leap between quantum error correction in logical qubits and fault tolerance is a large one, according to the authors of the new study. A fault-tolerant computer not only captures and corrects errors, but limits “the ways in which errors can spread throughout the system,” to avoid cascades of logical errors at key circuit locations.

Notwithstanding that extra challenge, researchers have made some progress toward fault-tolerant quantum error correction. But these efforts, the new paper’s authors suggest, have fallen short in some important ways. Some setups, for example, have been able to identify glitches, but not to pull out enough information to correct them. Others have achieved the ability to correct individual qubit errors in a fault-tolerant way—but the processes for encoding information into or preparing the quantum states of those qubits has not itself been fault tolerant, opening up a back door for other errors.

The team behind the new work wanted to implement a code that was fault-tolerant from end to end, across “all of the required operations: state preparation, measurement, logical gates and stabilizer measurement.”

To do so, they used the experimental ion-trap quantum-computing platform in Monroe’s lab at the University of Maryland Joint Quantum Institute (JQI). On that platform, up to 32 identical, laser-cooled 171Yb+ ions, trapped in an array on a microfabricated chip within a vacuum chamber, serve as the physical qubits. To perform computational operations, the individual ions can be tickled with light from 32 separately controllable lasers.

To create a logical qubit from those individual physical ones, the researchers selected an existing quantum error-correcting code, the so-called Bacon-Shor code, that was a particularly good fit for the ion-trap system. That code was already known to have the ability to correct any single-qubit error. And, on an ion-trap platform in particular, its characteristics would allow comparatively easy fault-tolerant code preparation and measurement.

The team set up its logical qubit in a linear array using 15 trapped ions—nine to serve as data qubits; another four “ancilla” qubits required by the Bacon-Shor code; and two idle qubits (one on each end of the array) to nudge the other ions into uniform spacing. The researchers then put this logical qubit through a series of operations including state preparation, measurement, logical gates and stabilizer measurement, in the presence of noise.

The team also was able to move the qubit through a simple quantum logic gate (a so-called Clifford gate) with an error rate of only 0.3%, showing that the logical qubit was effective in containing errors and preventing their spread. The researchers even intentionally injected single-qubit errors into the system—and found that the logical qubit was able to capture and correct them in all cases. “We have demonstrated,” the team concluded, “fault-tolerant control of a logical qubit capable of correcting all single-qubit errors.”

Better than the sum of its parts

In a press release accompanying the research, Laird Egan, a JQI grad student and the first author on the study, characterized the new work as “really a proof of concept that quantum error correction works.” Kenneth Brown of Duke University, a coauthor on the study, said that fault-tolerant error correction would “enable us to make very reliable quantum computers from faulty quantum parts.”

Getting from the team’s initial proof of concept to something oven-ready for fully fault-tolerant quantum computing, however, will likely still be a long road. The researchers are now working on extending the system to more challenging (and practical) quantum logic gates, schemes of active error correction across multiple rounds of computation, and systems of multiple logical qubits. Still, they believe that the current work could prove an important milestone in the journey to fully fault-tolerant quantum computers.