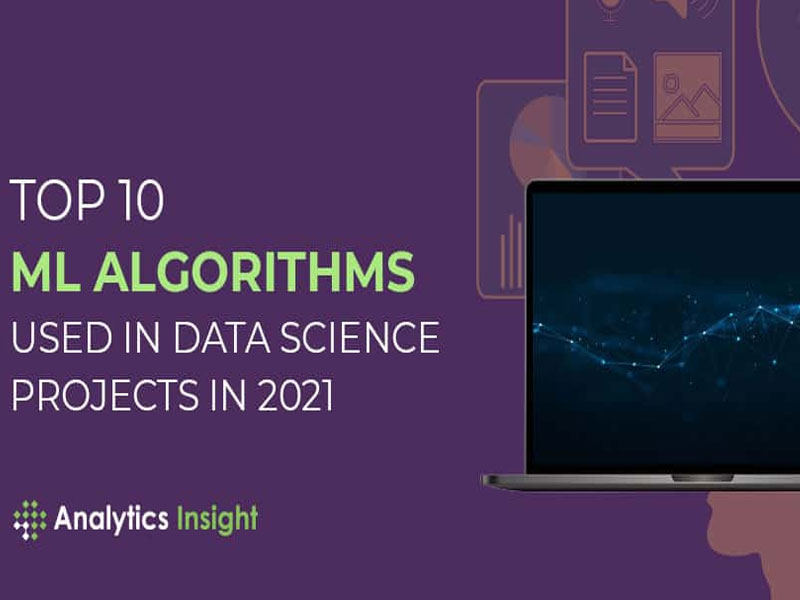 Here is the list of the top 10 ML algorithms used in data science projects in 2021:

Linear regression is perhaps one of the most well-known and well-understood ML algorithms in statistics and machine learning. You do not need to know any statistics or linear algebra to understand linear regression. That is why it is an ideal algorithm for your data science project.

Logistic regression is a statistical analysis method used to predict a data value based on prior observations of a data set. A logistic regression model predicts a dependent data variable by analyzing the relationship between one or more existing independent variables. It is one of the best ML algorithms used in data science projects in 2021.

Decision Trees (DTs) are a non-parametric supervised machine learning method used for classification and regression. The goal is to create a model that predicts the value of a target variable by learning simple decision rules inferred from the data features. A tree can be seen as a piecewise constant approximation. It is one of the most preferred ML algorithms for data science students.

Naive Bayes models are a group of extremely fast and simple classification algorithms that are often suitable for very high-dimensional datasets. Because they are so fast and have so few tunable parameters, they end up being very useful as a quick-and-dirty baseline for a classification problem. Naive Bayes is a perfect ML algorithm for your data science project.

In machine learning, support vector machines are supervised learning models with associated machine learning algorithms that analyze data for classification and regression analysis. SVM algorithm is a method of a classification algorithm in which you plot raw data as points in an n-dimensional space (where n is the number of features you have). The value of each feature is then tied to a particular coordinate, making it easy to classify the data. Lines called classifiers can be used to split the data and plot them on a graph.

In statistics, the k-nearest neighbors’ algorithm (k-NN) is a non-parametric classification method first developed by Evelyn Fix and Joseph Hodges in 1951 and later expanded by Thomas Cover. It is used for classification and regression. In both cases, the input consists of the k closest training examples in a data set. It is one of the best ML algorithms for data science projects in 2021.

It is an unsupervised learning algorithm that solves clustering problems. Data sets are classified into a particular number of clusters (let’s call that number K) in such a way that all the data points within a cluster are homogenous and heterogeneous from the data in other clusters.

A random forest is a machine learning technique used by data science professionals to solve regression and classification problems. It utilizes ensemble learning, which is a technique that combines many classifiers to provide solutions to complex problems. A random forest algorithm consists of many decision trees.

Dimensionality reduction refers to techniques that reduce the number of input variables in a dataset. More input features often make a predictive modeling task more challenging to model, more generally referred to as the curse of dimensionality. It is one of the best ML algorithms for data science projects in 2021.