This AR wiz's book is all you'll need to wrap your head around Augmented Reality. Check it out 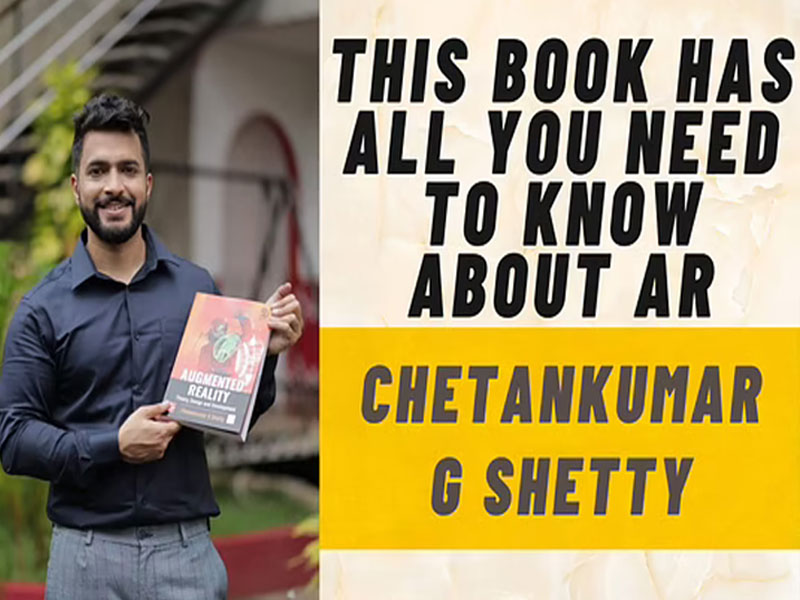 When Chetankumar G Shetty first started working on a project with Augmented Reality (AR), he was among the very few in the country to do so. This was in 2011, when Chetankumar was in his final year of engineering at Visvesvaraya Technological University (VTU) in Bengaluru. He became so fascinated with the concept that he decided to dedicate all his attention to it. Now, after almost ten years, Chetankumar has penned down whatever he has learnt about this technology during his career, in a book titled just that — Augmented Reality: Theory, Design, Development.

Speaking about why he decided to write his debut book, Chetankumar says, "When I started working with AR, it was seen almost as something magical. It was mostly image-based and people would focus their cameras on a page with markers and watch the image come alive. This was all very new, the technology hadn't developed yet. But I realised that this is the future." It was a few years after this that Chetankumar decided to write the book. "While working in this field, I realised that there wasn't that one book that could help students, researchers and even software professionals understand the basic concepts of AR. The few books that were there didn't highlight how the technology works or the mathematics behind it," he says.

Chetankumar started writing the book around six years ago and it has been through several revisions, that too by pioneers in the field. Mark Billinghurst, who is a Professor at the University of South Australia and the University of Auckland, was an adviser and reviewer of the book. The book was also reviewed by Kiyoshi Kiyokawa, a Professor and the Director of Cybernetics and Reality Engineering (CARE) Laboratory, Nara Institute of Science and Technology (NAIST), Japan. "It took longer to finish the book because of the continuous and rigorous refinement and review that it underwent," explains Chetankumar.

Not only is the book — which has been published by McGraw Hill — a part of CARE Labs' list of reference books for their AR and VR courses, it will also be introduced by BMS College of Engineering in Bengaluru as part of its MCA course this year. "The book has been written as a textbook so that it helps students and professionals alike. Every chapter has an introduction and conclusion. There is also a summary of every chapter when it ends," says Chetankumar about the book's format. Based out of Bengaluru, Chetankumar says that it was his experience in the AR divisions of multiple software companies — including Mindtree, Envoy and currently, Bajaj — that has helped him understand the need for software professionals well.

Chetankumar also wanted the book to have enough images as he wanted to explain through examples. "Around 25 to 30 CEOs, professors and researchers in the field of AR have contributed images to the book. They have all been credited and the images are properly licensed," he says. However, the pandemic and the ensuing lockdown delayed the book by several months. It was supposed to be published in March last year, but it could only be published in August. The book is now available online on websites like Amazon and Flipkart.