‘The world’s most visible artist’: KAWS on augmented reality, showing his work in Fortnite and the future of digital art 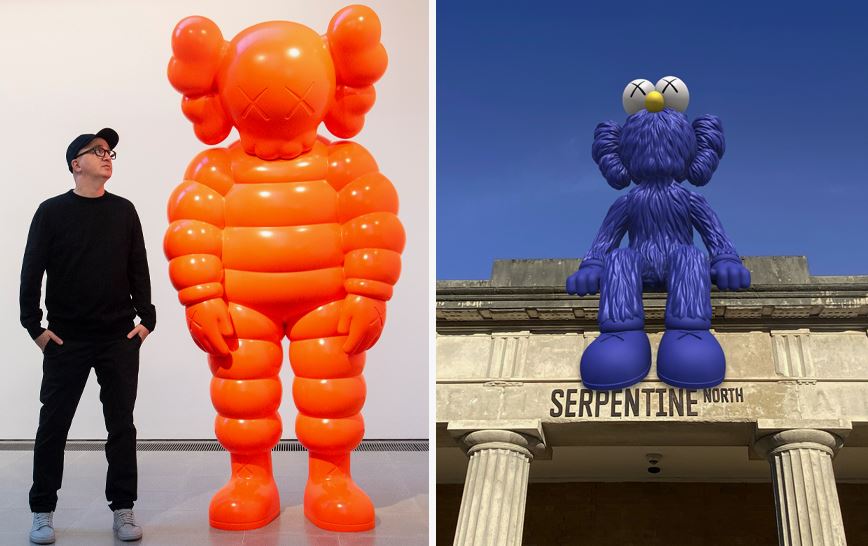 On 12 March 2020, the American artist KAWS launched Expanded Holiday, a free, outdoor exhibition that took place in 12 sites around the world simultaneously.

Using an augmented-reality smartphone app, visitors could view one of his giant Companion sculptures floating above locations including Times Square in New York, the Louvre in Paris and Tokyo’s Shibuya Crossing, then share their experience on social media.

The timing was serendipitous. Just 24 hours before the opening, the World Health Organisation declared Covid-19 a global pandemic.

‘We’d launched with the idea to send people all over the world to geotag these works,’ explains KAWS (whose real name is Brian Donnelly). ‘Then, as the world shut down, we said, “Well, we now have this great opportunity.”’

Expanded Holiday had given KAWS, and the art world, an alternative vision of the future of exhibitions, in which museums, galleries and fairs — or even physical artworks — might no longer be necessary.

The artist’s latest exhibition, NEW FICTION at London’s Serpentine North gallery — his first major solo show in the city — takes this opportunity and pushes it one step further, by existing in three separate realities at once.

‘I’ve always thought about communication and how to reach people,’ says KAWS. ‘I realised early on that you exist in your bubble, but there are so many other bubbles in the world that are going on at the same time, and they’re all equally important.’

The Serpentine’s physical show contains several bronze sculptures of the artist’s signature Companion characters with Xs for eyes, as well as a selection of his relatively new, vivid abstract paintings.

‘I love the idea of interacting with people in these different ways, in very candid ways. It doesn’t need to be a big painting on a wall’ — KAWS

When viewed through a smartphone using the Acute Art app, however, digital works appear on empty plinths around the gallery as augmented-reality sculptures. There is even one sitting outside, above the entrance to the building.

The app also allows users who can’t make it to London to place these works in public spaces near them, or in their own homes.

The third reality is a 1:1 virtual recreation of the show inside a video game — in this case, Fortnite.

Fortnite has more than 400 million users. If just one per cent of them visit NEW FICTION over the next week, it will receive more than six times the footfall of the 2019 Venice Biennale.

In the view of the exhibition’s curator, Daniel Birnbaum, KAWS is now ‘the world’s most visible artist’.

KAWS: NEW FICTION as seen in the virtual world of Fortnite. © Epic Games

For KAWS, the show is about breaking down barriers between gamers and the art world. He was first drawn to the idea of working with Fortnite when the rapper Travis Scott performed a virtual concert in the game to an audience of 12 million in April 2020.

‘I was thinking about my first interactions with galleries or museums and feeling like “Should I be here?” I think this is a great introduction to my work for many people,’ KAWS explains.

‘That’s what is great about it, and I’m so excited to work within Fortnite. I think of it more like a book that somebody picks up, and if they’re interested in it they’ll spend a little more time investigating and learning more.’

The combination of Covid and spending so much time indoors has caused him to fast-forward the digital elements of his art exhibitions, he says.

KAWS created his digital artworks by taking three-dimensional scans of maquettes of his sculptures in his Brooklyn studio, then sending them to Acute Art’s London office.

Once these images had been rendered by a digital engineer, conversations about texture and colour took place. ‘It’s the exact same process I have with a regular bronze foundry,’ he says.

‘I talk to so many people in the NFT space, and it’s a fascinating world and I enjoy watching it go by’ — KAWS

KAWS and Acute Art then presented the idea for the show to the artistic director of the Serpentine, Hans Ulrich Obrist. ‘Hans was very excited about it. It felt like the right project for the time,’ says KAWS.

A desire to share his art with a broad audience is nothing new for KAWS, who started out in the 1990s as a graffiti artist in New York.

He has disrupted the traditional role of an artist and embraced mass consumerism by designing trainers for Nike, skateboards for Supreme, soft toys for Sesame Street — and even a range of lightbulbs for The Standard chain of hotels.

‘I’m interested in all these outlets because I love the idea of interacting with people in these different ways, in very candid ways,’ he says. ‘It doesn’t need to be a big painting on a wall. It could be any form. That’s very inclusive, and I honestly think it’s better for the work.’

Has KAWS thought about making an NFT? ‘I talk to so many people in the space, and it’s a fascinating world and I enjoy watching it go by,’ he says. ‘I just haven’t found the right thing that I feel would be an addition to the work I create.

‘I love the idea of using blockchains to authenticate works. That’s something I’ve looked at, and it’s developing rapidly. But I just don’t really want to sell a JPEG, so there is nothing currently in the works.’

KAWS: NEW FICTION is at the Serpentine North Gallery in London until 27 February 2022. The KAWS and Serpentine Hub will be the Featured Hub on Fortnite until 25 January 2022