Scientists are analyzing data from Denali’s Muldrow Glacier surge, which might unravel answers about the world’s glaciers 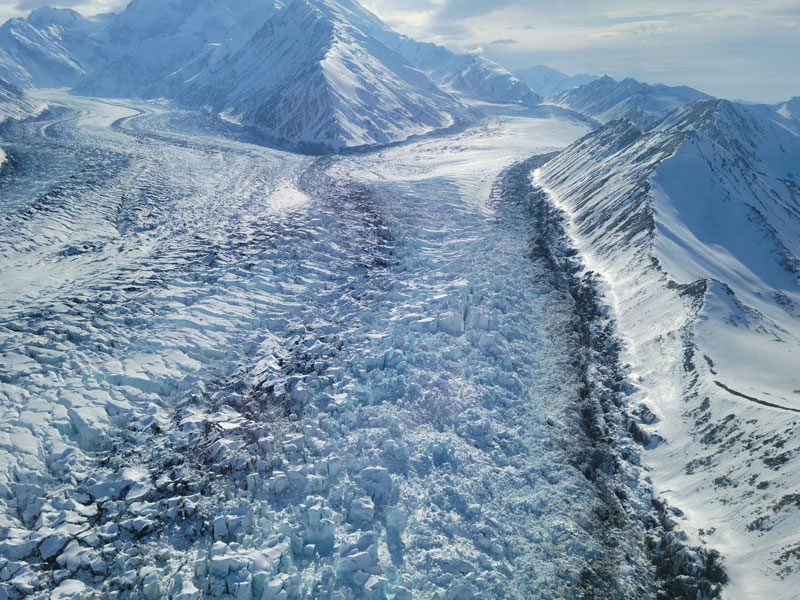 DENALI NATIONAL PARK AND PRESERVE –– Scientists scrambled to study a rare surge of the Muldrow Glacier in Denali National Park earlier this year that invited a barrage of questions.

Is the motion of a surging glacier smooth and continuous, or does it vary? Does the elevation of the glacier’s surface change? Would there be a gradual slowdown, or an abrupt end to the surge? Where does the floodwater come from?

In the quest for answers, glaciologists have begun to analyze data gathered this summer about the surge phenomenon, which the Muldrow Glacier –– known as Henteel No’ Loo’ in Athabascan –– experiences roughly once every 50 years.

Louis Sass, a senior glaciologist for the United States Geological Survey, said their research may offer a greater understanding about the world’s receding glaciers as warmer temperatures cause glaciers to become unstable and experience irregular movement.

“That’s the kind of area of research that could potentially give us a lot of insight into what the possibilities are in the future with climate change,” he said. “We’ll have more information on this surge than we have on really any other glacial surge out there.”

Martin Truffer, a professor of physics at the University of Alaska Fairbanks, noted that surge-type glaciers can also be catastrophic.

In 2016, at least 90 million cubic yards of glacial ice and rock detached from a Tibetan glacier and killed nine herders and hundreds of livestock, The Washington Post reported. In 2002, a 1.5-mile-long chunk of the Kolka Glacier, located on the Russia-Georgia border, detached from its base, according to a report from The Atlantic. Within 6 1/2 minutes, the ice traveled 11 miles into a nearby town at a speed of 150 miles per hour and killed more than 100 people.

For Chad Hults, the Alaska regional geologist for the National Park Service, monitoring this year’s Muldrow Glacier surge was a “once-in-a-career opportunity.”

“I mean, it was just awesome … (a) spur-of-the-moment, seat-of-your-pants science research project,” Hults said. “This is the best-studied surge ever.”

The Muldrow Glacier begins on Denali’s northeastern slope and flows 39 miles to form the braided McKinley River below. Surging glaciers account for about 1% of the world’s glaciers, Hults said, and can flow at speeds more than 10 times faster than normal.

These types of glaciers also cluster geographically. According to Truffer, Alaska’s surging glaciers are found in the Wrangell and Alaska mountain ranges.

In surging glaciers, ice continues to build up at higher elevations and doesn’t move as freely as the warmer ice below. Eventually, the ice buildup becomes unstable and begins to move to a lower elevation in what is known as a surge.

This year, numerous glaciers in the state were surging, including Southeast Alaska’s Malaspina and Turner glaciers, Truffer said. However, the proximity of the Muldrow Glacier to the Denali Park Road made it widely accessible for researchers to study during the course of almost its entire surge.

“This might be the last year you can see the glacier surge from the road,” Hults said.

The challenge to gather information quickly was enhanced by working on a shoestring budget, but everybody pitched in to make it happen, Truffer and Hults said.

[Loss of glaciers to warming will take a toll on world tourism, power supplies and more]

Truffer is excited for this year’s data to be added to decades of existing work.

The last recorded surge of the Muldrow, which advanced roughly 4 miles, occurred more than 60 years ago. Evidence also suggests a surge occurred between 1906 and 1912.

Scientists determined that the most recent surge ended July 22, although portions of the Upper Traleika Glacier –– an arm that flows into the Muldrow –– were still surging, Hults said.

“We haven’t seen many surges start and propagate with enough detail to sort of understand where they started,” said Sass, the USGS glaciologist.

In the days leading up to the outburst flood –– an event in which trapped water underneath the glacier releases and signifies the end of the surge –– it was found that the glacier’s speed increased by about 70%, Hults said, and people didn’t realize that happened.

“Whenever you see something you didn’t expect, that’s always an exciting thing because that means there’s something to learn,” Truffer said.

On March 4, K2 Aviation pilot Chris Palm was flying over the Alaska Range giving a flightseeing tour, talking with visitors about climbing routes.

As he flew, the white and blue landscape below was illuminated by the bright spring sun. He began to notice jagged ice where smooth ice once lay dormant.

Newly-formed crevasses and large chunks of broken ice are seen along the Muldrow Glacier and surrounding area, photographed on Sunday, March 14, 2021. (Photo by Chris Palm)

“The lateral moraines of the Muldrow and Traleika glaciers are all jagged and torn up, more so than other similar sized ones,” he wrote in an Instagram caption alongside some of the first photographs made of this year’s surge.

“I’m curious if they are starting to surge again…interested to hear what an expert says,” the caption concluded.

Work began immediately to begin capturing the sights and sounds and monitoring the surface of the glacier.

It’s like “waking the dragon,” Hults said. “It’s just been asleep for 60 years and all of sudden it’s come raging down the mountain.”

Sound stations were set up around the glacier to record audio while satellites collected images from high above.

Mark Fahnestock, a research professor at the University of Alaska Fairbanks Geophysical Institute, and Bretwood Higman, executive director of the Seldovia-based research and science nonprofit Ground Truth Trekking, helped confirm that the surge began sometime in January by creating an animation of the satellite images.

Aerial images of the glacier were stitched together to create an elevation map that helped scientists monitor changes in the glacier and its flow rates.

A couple dozen of scientists took part in monitoring, analyzing and recording the 2021 surge –– an enormous undertaking that culminated in weeks of on-site testing and months of monitoring. The analysis of data will take a year or two to complete, Hults said.

“There really is a data revolution going on right now,” Truffer said, attributing it to an advancement in satellite coverage and image processing capabilities. “Until a few years ago, most of the surges we miss.”

NPS scientist Chad Hults sets up a time-lapse camera near Anderson Pass on Sunday, March 28, 2021. The main stem of the glacier can be seen behind him. (NPS Photo)

About two weeks after Palm’s observations, Hults made aerial photographs to determine where to station GPS devices to continuously monitor the glacier’s vertical and horizontal movement.

He found only two locations were stable enough to land a helicopter and install the equipment.

While installing the devices, one pilot stepped into a crevasse roughly the size of his leg, Hults said. As temperatures continued to rise throughout the summer, crevasses widened and some expanded roughly 20 to 30 feet across and ran 100 meters deep.

“The upper (GPS) was dangling by the battery bag into a crevasse,” Hults said.

A tripod and GPS unit nearly fell into a crevasse, which formed under it over the course of a month of movement by the Muldrow Glacier. (NPS Photo / Chad Hults)

For most of the summer, the glacier traveled about 65 feet per day –– the equivalent of one year’s worth of movement during the glacier’s stagnant period, Truffer said.

This year’s surge advanced within roughly half of a mile of the 1956-57 surge and traveled at a speed 100 times greater than its normal, stagnant speed.

A timelapse of the toe of the Muldrow Glacier taken with NPS cameras in May, 2021. (NPS Photos / Chad Hults)

By May, the surge was in full force. Jagged, sediment-covered walls of ice rising hundreds of feet into the air carved their way into the landscape. From a plateau on the tundra above, graduate students David Polashenski and Emily Fedders watched.

Transported in a National Park Service helicopter, Polashenski and Fedders, both Ph.D. students at UAF’s Geophysical Institute, spent just over two weeks this spring camping at Anderson Pass. There, they monitored the velocity of the glacier with a Gamma Portable Radar Interferometer –– a scientific device that didn’t exist during the ‘56-’57 surge.

University of Alaska Fairbanks graduate students Emily Fedders and David Polashenski photographed at Anderson Pass in Denali National Park and Preserve on Monday, May 10, 2021. The Muldrow Glacier valley and Mt. Brooks are behind them. (Photo by David Polashenski)

Anderson Pass was the ideal location to set up the radar, which continuously scanned the area every two minutes, Polashenski said. The pass overlooks an approximately 90-degree bend in the glacier and allowed the researchers to see a large swath of the ice and sediments.

The pair, both in their 20s and about halfway through their five-year degree program, also deployed six seismometers around the glacier. Seismic waves were created as the ice fractured and shifted. Although only two of the six stations survived the whole season after bouts with curious grizzlies, Polashenski hopes that data from these devices can help scientists understand how water is moving underneath the glacier.

Polashenski and Fedders watched as alpine wildflowers began to bloom and listened as Alaska’s migratory birds returned. They photographed ptarmigan, whose summer plumage poked through layers of dirty white feathers, and Dall sheep who grazed on the thawing tundra.

Some days, wintry weather returned and they awoke to snow. But the sounds of the surge never left.

“The entire time you were out there, there was a perpetual snap, crackle and pop of the glacier flowing by,” Polashenski said.

But every 30 or so minutes, house-sized chunks of ice fell along the edge of the glacier and made sounds akin to a catastrophic collapse of ice from a seaside calving glacier, he added.

The GPRI was deployed by the University of Alaska Fairbanks research team at Anderson Pass. (Photo by David Polashenski)

Polashenski’s observations echoed those made in 1957 by Morton “Woody” Wood, a Denali park ranger who completed the first accent of Denali’s South Buttress route in 1954.

“It really struck home with how similar the observations were in 1957 (Wood) made that we observed this summer …looking down onto the same creek bed,” Polashenski said. Even without the modern advances, “these folks were able to observe the exact same environment and describe it accurately.”

There’s no telling what technological advances will occur in the next 50 years that could provide glaciologists with the tools to further understand surging glaciers. Polashenski just hopes that in 50 years he’ll be retired.

“It was a distinct privilege,” he said of his time at the Muldrow Glacier.