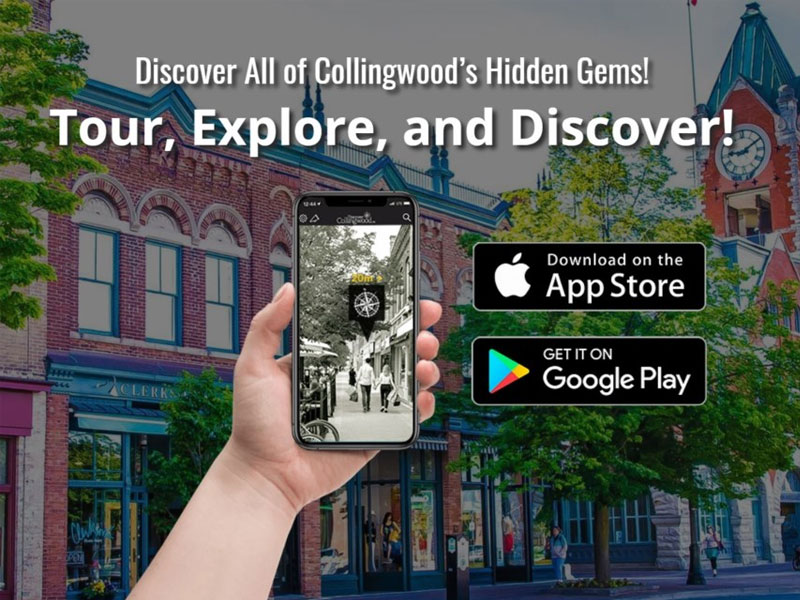 The Discover Collingwood smartphone app is an interactive augmented reality experience where users can participate in walking tours Collingwood’s history.Screenshot/DiscoverCollingwood.ca

A new app developed by the town links Collingwood’s past, present and future through the technology of today.

New discovery hubs have been placed in key spaces throughout the downtown core and beyond which, when paired with the new Discover Collingwood smartphone app, link to an interactive augmented reality experience where users can participate in walking tours Collingwood’s history.

Augmented reality is a technology that superimposes a computer-generated image on a user's view of the real world, thus providing a composite view.

“It’s one of the first of its kind in Ontario. We’re very excited about that. It’s an emerging technology,” Brennan Kenney, manager of economic development with the Town of Collingwood, told council during a strategic initiatives standing committee meeting on Wednesday night.

“This app is a mix of an audio and video experience,” he said. “It’s like a choose-your-own-adventure.”

Tours can be accessed through scanned QR Codes or can be searched on a Collingwood map.

Kenney said the app is set to rapidly expand as the town works through development, and will include maps showing parking lots and links to local businesses. He said current events will also be added, and users could have the option of getting push notifications for new events occurring in town during a planned trip.

Currently, there are five self-guided interactive tours, most of which start at town hall. The most popular tour so far is a Harbour Hike. Kenney said the tours build on the work of the heritage advisory committee and the Collingwood Historical Society.

The app is designed to encourage visitors to move away from highly trafficked areas such as local parks and into business areas to encourage more spending and reduce the overuse of parks.

“The goal here is to allow people to linger in our downtown,” said Kenney. “We like to push this ‘Tech Hub North’ idea in Collingwood and I think this fits in really well with that.”

Coun. Mariane McLeod asked how often the tours and app would be refreshed with new content.

Kenney said the town is planning to update the app at least annually, if not more frequently.

McLeod also asked about future plans for public Wi-Fi. Staff said they would look into it and report back.

The app is currently only being marketed locally so the town can receive feedback through the app and make adjustments before a larger marketing campaign commences in the spring/summer of 2022.

“We really want that feedback from the community so we can work out some of the kinks,” said Kenney.

The Discover Collingwood app is available on Apple devices, with plans to bring it fully to Android devices later this year.