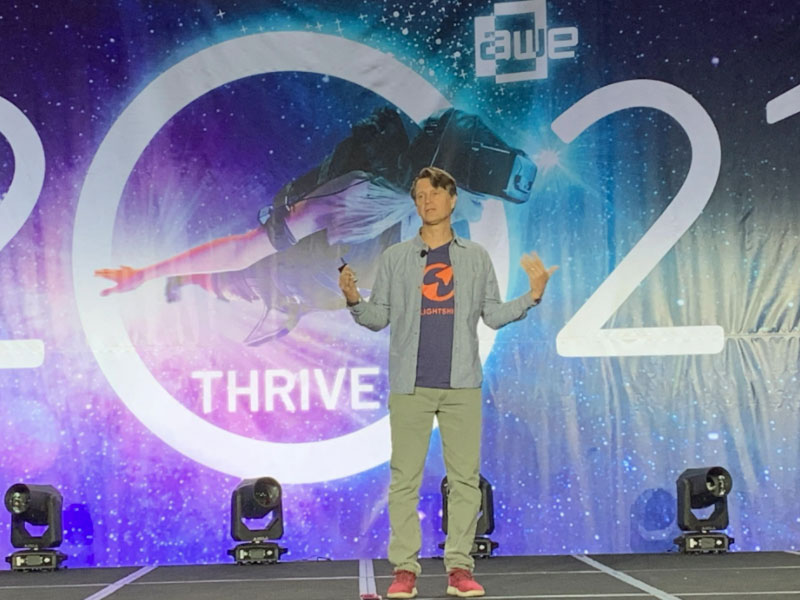 Today, the tech industry is facing its most important moment in 20 years, a moment in which decisions are going to be made that affect the future of technology—and humanity.

That was the message John Hanke, CEO of Niantic, gave AR and VR developers attending Augmented World Expo 2021 last week. Niantic is the company behind Pokémon Go and other augmented reality apps, and is currently developing AR glasses.

Hanke was, of course, talking about the coming metaverse, the term pushed center stage by Facebook (now Meta) as a description of the era of wearable, always available, augmented reality technology. The term metaverse comes from the futuristic 1992 novel Snow Crash by Neal Stephenson.

"I love [Stephenson's] work," said Hanke, "but we all know how those stories go. In the fictional future, the world has become such a mess, things have gone so horribly wrong, that people have to escape into a virtual reality."

"That's not the future I want," Hanke said, "it's not the future we believe we will happen. We think we can use this tech not to escape the world into VR, but to build a better real world, preserve the real world as a place of purpose and novelty and community."

Company executives and developers, he said, need to now focus on building the metaverse responsibly, learning from what has been going on in tech industry for past ten years—including the spread of misinformation, political division, and loss of privacy.

"As excited as we are about the technology and what we can do with it, we recognize that this next phase of computing, this platform transition, carries with it big-time responsibility," Hanke told the developers, gathered in person at the Santa Clara, Calif., convention center and remotely online. "We are going to be making decisions about what this looks like, in terms of platform and product, and about how much human values come into play."

Hanke looked back at the last big platform change—the emergence of the smartphone.

"We put a small computer in the hands of billions of people around the world, and it changed how all of us lead our lives," he said. "It's been transformative for humanity. But we've seen the downsides, in terms of tracking, privacy, and the behaviors that the platforms and applications encouraged in us."

The metaverse, Hanke says, will potentially have all the problems we have now with social media. But, because it will combine with the real world, developers will have even greater responsibility to protect users from these downsides.

"Think about a wearable device, with you all day long, on your head," Hanke said. "It probably knows where you are looking most of the time. Maybe it knows other things, like your heart rate. If you see an advertisement, did your heart rate go up? When you see a person [it identifies], what did your heartrate do? Did your pupils dilate? What about your emotions? Are you happy, sad, anxious?"

"This is not science fiction," he continued. "Tech can do what I described. Whether we allow that to evolve into the dystopia that we all know it could be, or take steps to turn it into something else, is a collective job for all of us."