Meta, what? How the metaverse and augmented reality will transform entertainment 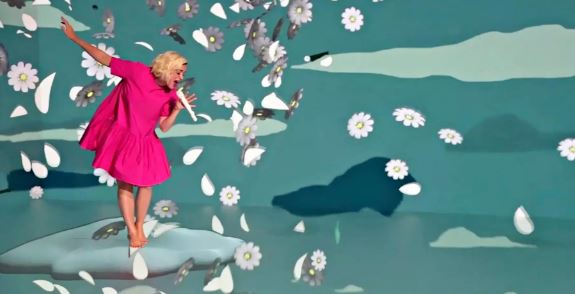 What will Hollywood look like 10 years from now? It's a question that EW posed to dozens of filmmakers, musicians, producers, and actors for Hollywood 2032, our look at how popular culture might evolve over the next decade. Below, we delve into the amorphous and much-bandied-about term "metaverse" and discuss how augmented reality will transform the way you consume entertainment.

Talk to enough experts about Hollywood's next decade, and one thing becomes clear: The immersive virtual world known as the metaverse is coming. Not sure what that implies? You're not alone. Rob Bredow, the SVP, chief creative officer of Industrial Light & Magic, whose history of visual-effects innovation includes everything from Terminator 2: Judgment Day to WandaVision, says even cutting-edge creators aren't in sync when it comes to the metaverse. "It's kind of an overloaded term," he says. "Every time we have one of these discussions, the first question I ask is, 'What do you mean by "metaverse"?'"

No matter how you define it, the metaverse will give big-budget Hollywood storytelling a major creative jolt. Granted, high-end high tech like virtual-reality headsets (which place you within a 360-degree interactive environment) and augmented-reality glasses (which overlay digital elements onto the real world) have yet to become must-have accessories. But in the next 10 years, VR and AR devices will become cheaper and easier, letting us enter the metaverse and interact with our favorite fictitious worlds and characters — a phenomenon that Bredow and his ILM team refer to as "story-living."

Many of those more elaborate experiences, of course, are years away — if they even happen at all. But there's enough faith in the metaverse's future to lure both Silicon Valley and Wall Street: Mark Zuckerberg has made clear his intentions to pivot Meta (formerly Facebook) towards a metaverse-first company; Microsoft recently spent a 10-figure sum to acquire video-game giant Activision Blizzard, signaling a major interest in VR and AR; and Apple is reportedly developing its own high-tech headset.

Some of the metaverse's more far-out storytelling applications are hard to visualize. And Hollywood has long been suspicious of new technologies, with studio execs pushing back against everything from TV sets to VCRs to early downloading. (It doesn't help that many writers and directors have unpleasant memories of the last heavily hyped screen-based technology: "As someone who spent hundreds of f---ing hours converting The Green Hornet to 3-D," says Seth Rogen, "I can tell you that trend has definitely gone by the wayside.") It will likely take some time for those in the AR and VR industry to persuade writers and directors to start pitching their visions for the metaverse. "It's a matter of getting [them] to think less about one linear narrative and to think more about, 'What is the world I'm building? And what can people do in that world?'" says Timoni West, VP of Augmented & Virtual Reality at Unity Software, a real-time 3-D platform. "But once movie directors get into this, they're going to be all about it."

Some see the merger between gaming and traditional visual storytelling as a given: "Video game companies are going to become major players in the Hollywood landscape," says Russo, "because they have the IP, they have the deep pockets, and they have the technology." And thanks in part to the pandemic, the gaming biz is nearing all-time high scores, at least in terms of revenue: According to the analytics firm New Zoo, industry earnings will surpass $200 billion worldwide in 2024.

Even filmmakers who don't want to go full meta will find their work merging with VR and AR, says Jane Rosenthal, Oscar-nominated producer and cofounder of the Tribeca Film Festival. When the pandemic shut down movie theaters, it spurred creators to seek out new venues for their work. Some turned to virtual platforms such as Fortnite, the insanely popular online game that has premiered trailers and short films, and even hosted a trio of Christopher Nolan's biggest films. As the metaverse grows, Rosenthal says, "you'll have concerts there, or you'll watch a movie. It's the consolidation of entertainment and gaming—but one's not going to preclude the other."

If plunging head-first into a virtual world still feels intimidating, don't worry: There will be plenty of ways to get your meta-fix and chill by 2032, especially when it comes to music. Artists such as Justin Bieber and Ariana Grande have staged live shows within the metaverse (in avatar form, of course). Katy Perry — who employed augmented reality for a trippy American Idol performance — foresees a 2032 in which stadium tours come directly to fans, via AR or VR. "You're not just selling tickets to people in real life," Perry says, "you're selling them digitally anywhere." And when you do head out for a concert a decade from now, you might be bringing your metaverse gear with you. Hip-hop artist Open Mike Eagle imagines live shows in which musicians unleash lively visuals via AR glasses: "You could have colors exploding in a three-dimensional space and reconstituting themselves to the beat of the music. If I could control that from the stage, that would be a lot of fun."

The all-encompassing energy of the metaverse does sound like a blast. And millions are already gearing up for it, as evidenced by record-setting sales in VR and AR hardware last year. But for those who just want to veg out the old-fashioned way, it also sounds kind of exhausting. Thankfully, traditional entertainment will still play a big role in our lives in 2032—with some futuristic twists, of course. Find out how over here, as we delve much deeper into the future of Hollywood.