How Pakistan’s young economy can harness the power of blockchain 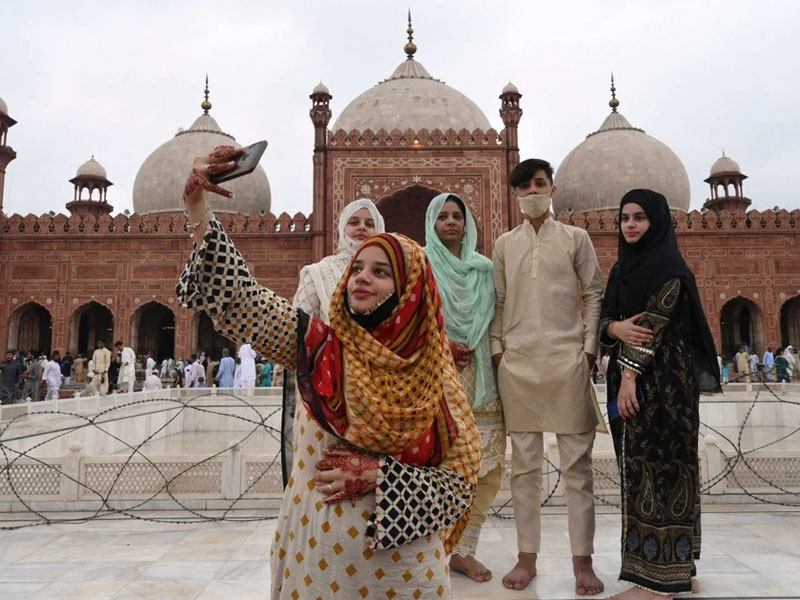 A woman takes a selfie with her friends after offering prayers at Badshahi Mosque during Eid al-Adha, the Festival of Sacrifice, in Lahore, Pakistan, on July 21. Out of Pakistan’s population of over 221 million, some 64 per cent are under the age of 30. Photo: AFP

Sandwiched between war-torn Afghanistan and tech-savvy India, Pakistan attracts little attention in the world of start-ups. But Pakistan’s start-up ecosystem has great potential and understanding this is critical for investors, start-ups and developed economies alike.

Pakistan’s young population, high mobile penetration rate and relative political stability are all economic driving factors that can change the course of its future. But to catapult itself into modern competition, Pakistan needs blockchain technology – a blockchain start-up ecosystem may very well secure Pakistan’s economic longevity.

The potential for human capital development is huge. Out of Pakistan’s population of over 221 million, some 64 per cent are under the age of 30. Last year alone, internet users grew by 21 per cent. The internet penetration rate, with an emphasis on mobile devices, highlights Pakistan’s tech-readiness.

While not exactly the poster child for political stability, Pakistan is one of the more secure countries in its region, having successfully made the difficult transition from military rule to elected government.

In recent years, budget spending on education has grown alongside investment in human capital. In April, the government said its central bank would set up a US$75 million fund for entrepreneurs and small start-ups.But there are big challenges. In June, for example, a tax was announced on mobile phone calls lasting more than five minutes. Human rights are still a significant issue while terrorism and extremism remain problems, especially with the Taliban now in control of Afghanistan.

“Change typically comes from the top down, but if you look at the emergence of blockchain, it’s been primarily a grass-roots-style movement,” said NxtBlock Capital’s Junaid Lughmani, whose family is from Pakistan. He believes that for Pakistanis, blockchain can facilitate “hope and opportunity through collective action”.

Some companies in Pakistan are starting to do that. Pakistan’s strengths in several industries lend themselves well to blockchain implementation.

For a start, Pakistan is one of the world’s largest cotton producers with Asia’s third-largest spinning capacity, and its textiles industry is responsible for about 60 per cent of the country’s annual exports. This makes the sector perfect for blockchain.

A recent example is the collaboration between Karachi-based Artistic Fabric Mills (AFM) and Dutch start-up Aware, announced in July, to enable traceability of AFM’s sustainably produced denim. Essentially, a physical tracer paired with a digital blockchain twin ensures the denim is tracked throughout AFM’s supply chain.

A Pakistani mango seller waits for customers in a fruit market in Islamabad, Pakistan. The country is the world’s sixth-largest mango exporter. Photo: AP

Another blockchain-ripe industry is agriculture. It contributes about 20 per cent of Pakistan’s gross domestic product while employing up to half of the labour force. The country is the world’s sixth-largest mango exporter.

Abhi, for example, provides employees of companies with salary advances based on accrued wages, since loans requiring repayment with interest are forbidden for Muslims.

Muslim devotees break their Iftar fast along a road during the holy month of Ramadan in Rawalpindi on April 28. Pakistan has the world’s second-largest Muslim population. Photo: AFP

The halal supply chain could also benefit from blockchain, especially after the 2019 changes to Pakistan’s halal-labelling legislation. Halal labelling can be heavily reliant on manual processes and a burden on many importers of foreign food and drinks. But blockchain can provide verifiable transparency for products within the halal supply chain, easing the process for overseas vendors.

Clearly, the factors are in place for home-grown technological innovation to support blockchain initiatives in Pakistan, with its young population, high mobile penetration rate and the government’s investment in human capital and technological growth.

And there is distinct potential in Pakistan’s core industries for blockchain start-ups to achieve unprecedented growth.

If harnessed correctly, blockchain start-ups can help modernise many of Pakistan’s vital industries and, when combined with the potential for tech talent, can catapult the country into a new era of economic and technological growth.