Here’s the tech behind the Carolina Panthers’ giant AR cat 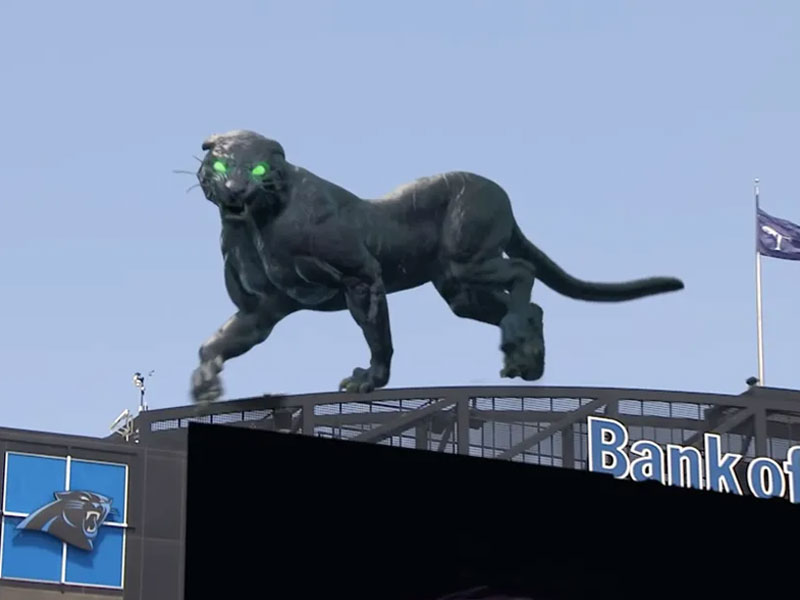 This past weekend marked the first Sunday of the 2021 NFL season, and while it was full of exciting highlights, one may have towered over them all: the Carolina Panthers’ viral video of a giant virtual panther leaping around Bank of America Stadium.

The video is ridiculous. A big virtual cat jumps into the stadium, paces around the field, shreds a New York Jets flag (the Panthers’ Sunday opponents), and hops away with a menacing roar. It’s proved to be hugely popular, with 5.6 million views on Twitter.

While the Panthers’ tweet calls the mascot a “mixed-reality panther,” it actually seems closer to augmented reality applied on a really big scale, according to a conversation I had with Jon Slusser and CJ Davis of The Famous Group, the company behind the virtual panther.

In short, what’s going on is that an animation of the virtual panther, which was made in Unreal Engine, is being rendered within a live feed of the real world. That means camera operators have to track and follow the animations of the panther in real time as it moves around the stadium, like camera operators would with an actual living animal. To give the panther virtual objects to climb on and interact with, the stadium is also modeled virtually but is invisible.

This tech isn’t baked into an app, meaning you won’t be pointing your phone’s camera in the stadium to get another angle on the panther if you’re attending a game. The animations are intended to air live. In Sunday’s case, the video was broadcast live on the big screens at the stadium, and shortly after that, the video was posted to social media. (One cool tidbit: in the video, you can see that the stadium screens have black screens with cat eyes. Those were applied to prevent a mirroring effect, a PR rep for The Famous Group said.)

While only the one animation of the panther was shown on Sunday, Slusser and Davis said that other animations for the panther are in the works. One potential example? Appearing during a crucial third down to “hover over the opposing team and growl at them,” Davis said.

THE ILLUSION IN THE VIRAL VIDEO IS CLEVER, BUT IT ISN’T PERFECT

The illusion in the viral video is clever, but it isn’t perfect. The cat definitely looks like a big CGI creature. And near the end of the video, when the panther roars from the top of the Jumbotron, you can see that its feet don’t exactly align with the architecture on which it’s standing.

But the giant virtual panther is a fun look at one possible use of AR to add to the experience of watching a big sports event. That’s already something of The Famous Group’s specialty — check out this video of a giant mixed reality raven made for the Baltimore Ravens, for example:

Or this video of how it used mixed reality to highlight top NFL players ahead of Super Bowl 2020:

While we’ve been hearing about the promises of augmented reality and mixed reality for a long time — Apple CEO Tim Cook has been singing its praises for years — it has eluded massive mainstream adoption. And The Famous Group isn’t the only company to create giant AR spectacles; Riot Games has pulled off its own dazzling mixed reality showcases for League of Legends events, such as bringing a giant dragon to the opening ceremonies of the Worlds 2017 final.