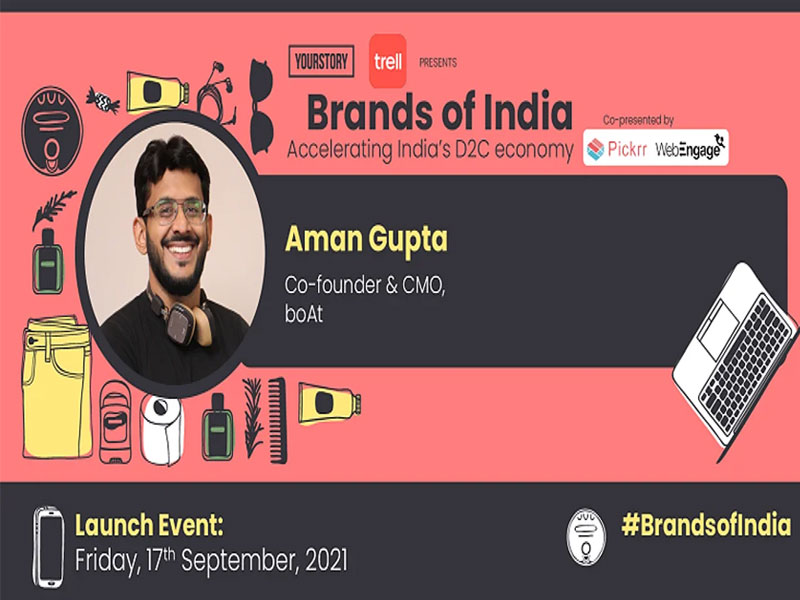 At the launch event of YourStory’s Brands of India, Aman Gupta, Co-founder of boAt Lifestyle, spoke about the company’s playbook for becoming a global brand from India.

In just five years since its launch in 2016, boAt Lifestyle’s founders Aman Gupta and Sameer Mehta have led the audio tech brand from India to become profitabile.

In the past year, boAt also doubled its employee strength and established a local R&D centre in Bengaluru, expanded into newer categories like smartwatches, besides launching over 20 new products in the audio category in FY21.

“Being an entrepreneur requires you to surf through different turfs in one go. This needs passion and love for what you are doing. Find what you like. Find your purpose and everything else will fall in place,” Aman tells Shradha Sharma, Founder and CEO, YourStory, at the launch event of YourStory’s Brands of India initiative.

In a fireside chat, he shared boAt’s playbook of becoming a global iconic brand from India.

Here are some key takeaways

Look at ROI in everything you do

Aman, brought up in a Baniya family, and Sameer, a Gujarati, believe they had business in their blood. “In our blood, we have ‘dhandha’ as a way of life, and I am an ROI driven marketer,” he chuckles.

Also, a chartered accountant by qualification, his instincts have always been towards not spending too much money. Aman is the one who handles boAt’s sales and marketing functions.

“Everything I do, everything I spend, I look at ROI. Even when Sameer and I started, we were at a coworking space, at a time when coworking was not as popular as it is today. Later, it became a fad, and everyone started doing it,” he adds.

One of his mantras is to save wherever you can, learn and do what you can on your own. Here are some examples:

“Marketing is one area where we did not stop investing but we didn’t waste money either. We used to make money on every sale and the profitability was given back to the marketing. So, our expenses were very low. We never hired expensive resources. At the time, when B2C was not as hot as it is today, revenues were also very less. But that mindset of being frugal helped us,” he says.

Do things the right way and money will follow

boAt is among the few companies that have become profitable while raising limited amounts of external funding. [enter funding details]

It was not that the company was not looking at funding but it had to bear the brunt of some of the unfortunate events that happened in the telecom industry.

Aman says, “Jaise wo likha hota tha na Amitabh ke haath mai ki ‘mera baap chor hai’, to mere bhi likha hua tha. That was written before we were born; how we will die. It was a very challenging time for us when we started and we realised very soon also that for us, it was more about doing the right things.”.

Do not give in to the peer pressure

Although boAt founders did not waste money, they struggled a lot on the personal front. As Aman shared, he did not take a salary until last year and even took loans from his dad. Also, being a CA and an MBA from ISB, his peers started doing even better.

“But you do what you have to do. I know that I love selling. I love doing what I'm doing. So for me, I just wanted to do what I love, and the success followed,” he says.

Look for customer feedback to know the right product-market fit

Aman believes that one should go with customer feedback to understand their needs and if they are in a ready state or trust the brand enough to try new products being launched on the platform.

In 2019, boAT claimed that it sold over 6,000 units per day with four units sold every minute. Later, 10,000 pieces of one of its wearable brands were sold within one minute of launch on Flipkart. That was when they shifted gear, from audio to wearables.

“The kind of response we received from ‘boAtheads’ gave us the promise that the brand was of good quality at a logical feasible Indian price point. So, the fact that our community responded so well and bought our wearables gave us confidence to expand beyond audio. And that is when we launched our new brand Misfit, which is into personal grooming devices,” he adds.

When boAt started out, there were 200 brands — both local and international — already selling audio devices in India. So audio was a cluttered commoditised market, and highly competitive.

In order to create differentiation, boAt first started hiring a lot of millennials who understood the behaviour of the brand’s young consumers. “Even today, I never hire a veteran of marketing. It's these young guys who can do it better than me or most of us,” says Aman.

At the time of the brand’s launch, whether people would buy it was a big question. However, the turning point was the realisation that today’s consumer is using their headphones and earphones as a fashion accessory rather than only as a utility product.

“That's the change we saw. And that’s where we bring in differentiation in form of price points and product quality. We called ourselves the Zara of electronic fashion. While our brand struck the cord with young ones, we also attracted those in the middle age group,” he adds.

Aman believes that once a startup reaches a certain level of success, it becomes necessary to invest in R&D and be on your toes as the industry changes very fast.

“We sell our product at a margin. We never lost money. We do not have too many expenses that we have to load too much on, so we kept the pricing logical — not too cheap, not too high. Just logical right pricing,” adds Aman.

Place your core focus on building your product and brand

Brands usually sell through three channels — offline, online or a combination of the two. boAt was born on marketplaces and then went offline, and now it is going to consumers directly.

“Throughout our journey, we have been focusing more on product and marketing, and not particularly on distribution and logistics. We found this experience much better on the marketplaces. So we kept our focus in building our product and the brand,” Aman says.

He also believes that once a brand becomes popular, the channel of distribution doesn’t matter.

“Today we have 10-15 percent of our business offline. We will do more than Rs 300 crore only offline, which is higher than a lot of B2C brands that are doing it only directly. So we have to only spend on the bottom of the funnel and probably keep that consumer with us. So, it was just about how we wanted to position ourselves initially,” he explains.

Accept the fact that you cannot know it all

When the founders appointed former Godrej Consumer Products executive Vivek Gambhir as its CEO, they were flooded with questions from the industry about their decision.

The problem, says Aman, is that most founders give into their egos and the misconception that they know it all. “But sometimes we don't know it all. We need help and there’s no harm in asking for help,” he says.

The co-founder adds that one needs to do things that are right for the company or the brand. Sometimes, there are founders who don’t want to let things go but instead of learning it the hard way, it’s better to understand them along the way while taking help from people who can do a better job.

On a closing note, Aman emphasises that if a brand doesn't listen to its consumers, they will buy something else. This is a time when Indian shoppers are getting attracted and giving due respect to homegrown brands, which was not happening earlier.

“So keep listening, keep adapting, keep changing. That's the mantra with which you survive. Just get the consumer and the value proposition right. And then you know, you can do it,” he concludes. Unique Wearable Tracker Can Detect the Whole Body in 3D

Companies are increasingly tracking eye movements — but is it ethical? This cutting-edge wearable tech has 1,200 tiny solar panels that can charge your phone 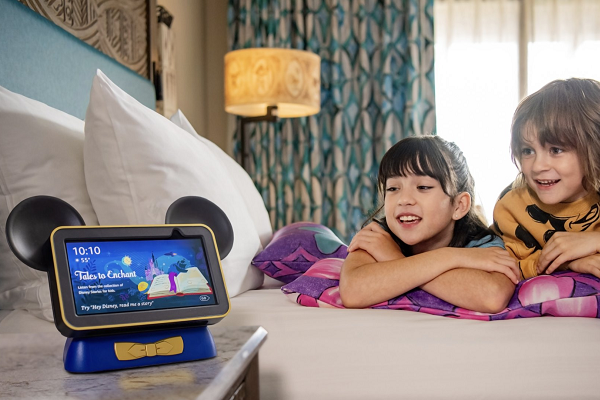 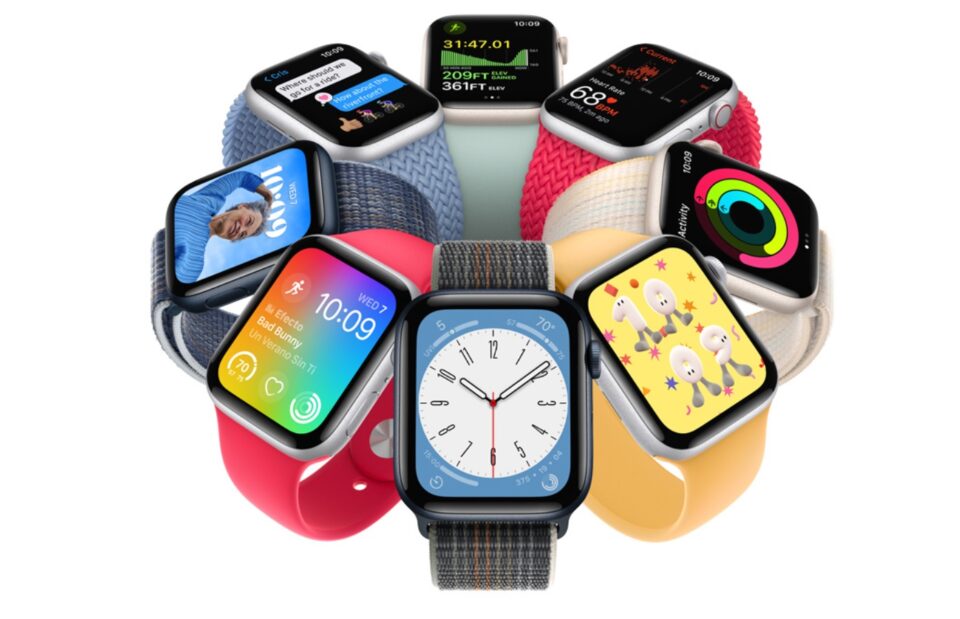