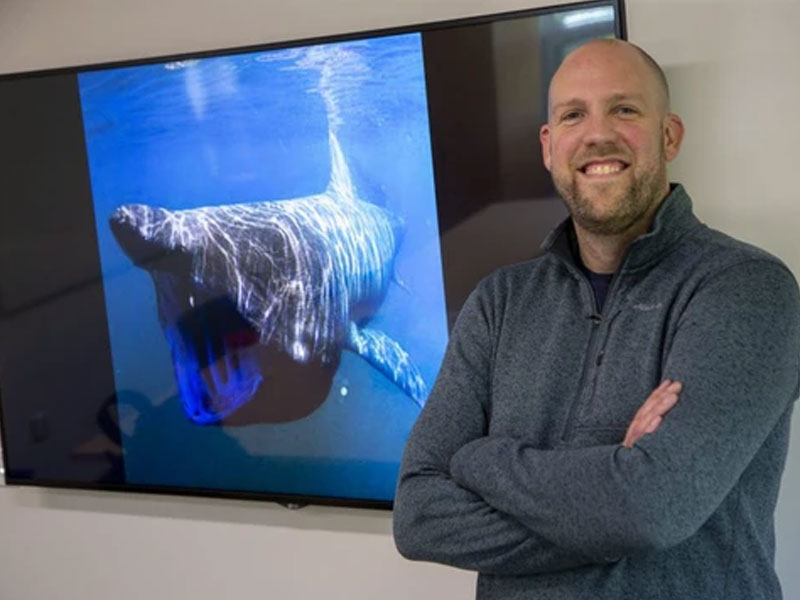 Swimming with the sharks has become a handy expression for describing difficult actions, but some Western University biology students will be getting about as close as you can to the real thing without getting wet.

Swimming with the sharks has become a handy expression for describing difficult actions, but some Western University biology students will get about as close as you can to the real thing without getting wet.

Using augmented reality, Western University biology professor Paul Mensink is working with London-based EXAR Studios to develop an app that will shrink students to “mini-size” to explore the inside and outside of the long-persecuted basking shark, the second largest fish in the sea after the whale shark.

Augmented reality enhances real-world objects by computers visually or in other ways, such as sound.

“It takes students through this really immersive style of learning instead of being a passive observer,” Mensink said.

Starting early next year, his first-year biology students, who come from several different faculties, will use their phones to discover new worlds under the sea.

“Students will look at their anatomy in full as if (the sharks) are standing right in front of them, and walk alongside it and see them opening their mouth and then getting swallowed,” he said.

Later the students will be virtually excreted as an organic material that forms marine snow, a kind of detritus, on the ocean floor, Mensink said

The project is funded by a US$50,000 grant from Unity Charitable Fund.

“They use augmented reality, which is basically this idea of overlay computer simulation or computer models in the real environment,” Mensink said. “The easiest way to do that is to use your phone. It will overlay those computer designs into the actual environment you are in.”

The premise of the three-year project is to explore whether the technology “could cross this over into education,” Mensink said.

“There are a lot of benefits to being able to see the things you are talking about. In a traditional lecture format, you would see a photo or a video of a basking shark. The difference here is you actually get to stand beside a basking shark and walk around it, as if it was standing right beside you,” he said.

Students will be required to tag the basking shark and understand the satellite tagging process, as well as identify threats they face, such as fishing nets and ship strikes, as part of their studies.

The new course is part of three-year project that looks at whether immersive technology, like augmented reality and game-based learning, will help students become more engaged and involved in their learning, Mensink said.

“My goal is to see these technologies thread throughout the university and be used more often,” he said. “I’ve got computer science students working on content for other courses in the university. We have students building an augmented reality game to teach students how to sort trash, as well, because we have such a high contamination rate in the university.”

Dining on plankton, the surface-feeding basking shark has an average length of about eight metres and is found in warm-water oceans worldwide.

Harmless to humans, basking sharks are considered a vulnerable species around the globe. In Canada, they are considered endangered by the species-at-risk program.

Researched extensively by Mensink, who calls the sharks a “super cool” species,” they have endured a “horrible history in Canada,” he said.

“In Canada we used to have a population on the west coast, but they were eradicated by the government as they were thought to be a nuisance species because they kept getting tangled in fishing nets,” he said. “There were actual boats designed as killing machines for this species.”